The Emperor's New Wiki is an encyclopedia with all about Kuzco and his friends (and enemies) from The Emperor's New Groove and The Emperor's New School, such as Malina, Kronk, Yzma, Pacha, and much more! If you're a fan of Mark Dindal's Disney movie and the series that continues it, welcome to the Emperor's New WIKI! And if you don't, enjoy the opportunity to meet a funny and well-done franchise! We are currently editing 171 pages, and you can help us to grow! Just find something cool to write about and type a page title in the box below. Have fun! 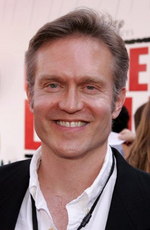 Mark L. Dindal is an American animator and director, who made The Emperor's New Groove. He worked in many Disney classic projects as an effects animator, and also leaded the special effects for several classic movies such as The Little Mermaid and The Rescuers Down Under.

Dindal studied his craft at CalArts, where he learnt the art of animation. This leaded him to get his first step on career, at Disney, in 1980... Read the full article!

This is May-June Featured Article. To a full list of featured articles, go here.

In The Emperor's New Groove, music has a great value. Sting and David Hartley's song, My Funny Friend and Me, had been nominated for a lot of awards, including the Oscar and Golden Globe. Besides, ENG won an Annie for the song Perfect World. You can tell music was a significant part of the movie. In Kronk's New Groove, new songs were featured, such as Be True To Your Groove, to represent Kronk's story. In The Emperor's New School, numerous episodes had featured songs. Check out the portal!

To a full list of poll results, go here.

This is the May-June Featured Image. To a full list of featured images, go here. 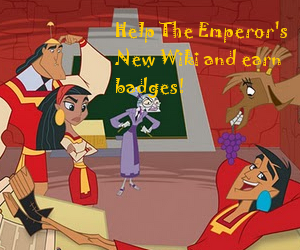 Quote of the Month

Kronk's eggs, property of Kronk, do not use, except for Kronk.

- Kronk Pepikrankenitz to Ms. Birdwell, reading the label on his egg carton in Kronk's New Groove.

Português do Brasil
Community content is available under CC-BY-SA unless otherwise noted.